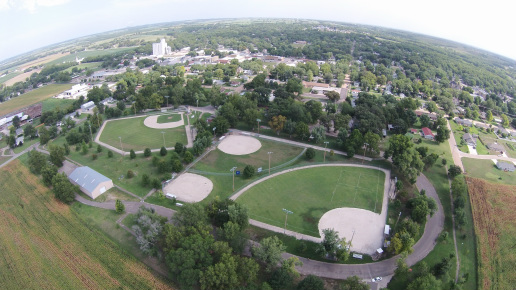 In 1920 the American Legion carried a petition that asked the city commission to make improvements to Riverside Park.  Their plan included swimming and skating facilities, gravel driveways, floral and shrubbery improvements, and eventually a community hall.  When the petition reached the city commission over 300 people had signed it.  However, in order to make the park work the city needed to obtain two tracts of land that fronted Oak Street (now Lasley.)  The city was able to purchase a tract from Mr. Rezac, but Mr. Pope wanted to trade his parcel on Oak Street for an equal sized parcel that bordered his residence.  The problem was that the tract Mr. Pope wanted was owned by the city and already part of Riverside Park, and although the city was willing to make the trade the statutes did not allow it.  The city pleaded its case to the legislature and in February of 1921 the law was changed to allow municipal corporations to sell or otherwise dispose of real property (land.) outside, within, or partially within the city limits. After a subsequent petition of 165 was gathered to conform to the new law, a bond election was set for October 3, 1921, to vote upon $10,000 in improvements to Riverside Park.  The bond election passed 204 to 95.

The proposed improvements consisted of a 60’ x 90’ concrete bottomed swimming pool ($4,000), a bathhouse, a lagoon for ice skating, graveled driveways, hedges lining the north and west boundaries of the park, an entrance gate at the northwest corner, as well as other floral items.  The Grand Opening of Riverside Park was held on Sunday, May 20, 1923, and was a success.  The city band played throughout the day and had a concert that night, the St. Marys ball club beat Alma 4-1, and there was a free swim in the new pool for every “human duckling.”

Much has changed in Riverside Park since its Grand Opening.  Although the swimming pool is still in the same location, in 1924 a wading pool was added north of the bathhouse, in 1963 there was a filtering upgrade, in 1965 the wading pool was torn out and relocated to its present location, in 1954 the bathhouse was remodeled to incorporate bathrooms and then remodeled again in 1987. In 1949 a five feet high chain link fence was erected around the pool at the request of the State Board of Health, in 1950 concrete was poured around the pool, and in 2006 $100,000 was spent to install a fiberglass coating in both the main and wading pools.

The lagoon proved to be too porous to hold much water.  In 1931 the city tried to pack it with sediment, then in 1935 and 1956 tried lining it with shale rock, and finally tried using Bentonite in 1978.  In 1974 there had been discussion about having the National Guard fill in the lagoon, but the city crew ended up doing that in 1980.  Years later the gazebo was constructed on that site (1993.)

In 1946 the high school began using the park for athletic events.  In 1953 and 1957, shelter houses dedicated to Aaron Urbansky were constructed.  In 1962 the Letterman’s Club purchased an electronic scoreboard (which was replaced in 1999), and in 1976 the Jaycee’s built a new concessions stand.  In 1987 the posts blocking through traffic on Park Street were replaced with speed bumps, in 1995 ADA compliant restrooms were added to the concession stands.  In 2000 the tennis courts were refurbished and in 2006 the second sand volleyball court was added.  In 2002, Park Street was renamed Coleman drive in honor of longtime city manager Maurice Coleman.
Link to Rec Desk